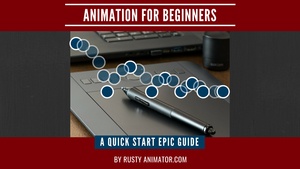 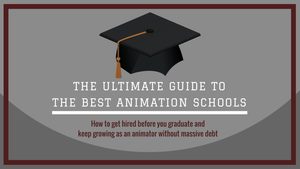 For a while, I’ve been scared to share this with you, or any person I know for that matter.

For a while, I’ve been shakily holding on, in denial about this, because it felt like letting one of my dreams die.

And I’m freaking out even typing the words  – for several reasons:

It’s time because I believe I should be completely honest and transparent with you about my own fears, weaknesses, and struggles. As I believe it will help you be a better animator – an animator more prepared to reach their dream.

In the past, I’ve spilled my guts on some of the hard struggles I’ve had with school, and at the start of my career.

You may have assumed that since then, as I’ve been a professional animator for more than 4 years around the world –  that all of the big struggles are behind me.

That all I do now is bask in my own glory, work on the biggest movies, and laugh maniacally at all the people who have real jobs.

But the opposite couldn’t be more true.

Today, I face a bigger struggle than I ever have before. A struggle I’m not sure I’m capable of overcoming:

I’m walking away from being a professional animator.

Writing this feels like cutting into my own chest carving out a piece of my heart and chucking it into a bonfire.

“WHY?! Why in the hell would you walk away
from the dream career we’re all after Rusty!?”

This decision hasn’t come lightly, and it’s been boiling deep under my skin since I became an animator.

After becoming a professional I thought I’d be content to just do my job for the next 10-20 years – like most of my friends are doing. They’ve made it to the best studios – Pixar, Disney, Blue Sky, Weta, Digital Domain, Blizzard – and they’re rising through the ranks living the dream.

That all would have been a pretty good life. A life no one should be ashamed of living.

But for myself, there was something bigger calling.

The longer I was a professional animator on different products, at different studios – the more I saw problems going unsolved.

Issues with how films were made.  Like non-creatives making all the key creative decisions that cripple a movie and demand extra long hours for all the artists involved.

Issues with schools that created an ineffective learning environment for dream jobs, and charged ridiculous debt for life tuition.

As time went along, I expected all these problems to get solved or at least see improvement. When they didn’t I realized I had 2 choices:

Option #1 would have felt like betraying my soul. It just never sat right – to let the status quo go unchallenged – unimproved.

From early on this “bigger calling” feeling was an insatiable burning hunger. And as it consumed my thoughts more and more every day – it became clear that this inferno was only going to do 1 thing:  blaze hotter.

To help students the way I wished I was helped. Teach the right skills the right way without massive debt and get them to their dream job easier.

Then ultimately, create a virtual studio for independent films with only artists calling all the shots. Live remotely, unleash creativity, get paid. A new career option for students. A new dream for how movies are made.

Although, 1 major obstacle stood in the way of this game plan:

There was never enough time for Rusty Animator

Since starting Rusty Animator I’ve been exhaustively torn between my animation job, my site, and my life – day after day for 3 years.

As a professional VFX Animator, I was often working 60-80 hour work weeks and this put Rusty Animator on the back burner by default.

To give you one example, in Montreal during X-men this meant I was also trudging through knee deep snow for 30 mins in the morning and 30 minutes to return home every day.

After closing the door and peeling an eyelid off my cheek, I’d try to tough it out for another hour or 2.  Try to line up the next podcast guest for Rusty Animator, or write a good chunk of a new blog post – before relaxing for the night.

Most of the time I failed to be consistent.

A month or two would go by without a podcast or a post. Emails from fans would get buried and unnoticed.

This exhausting cycle continued from movie to movie – from studio to studio.

And no matter how great the studio was, or the movie, I always found myself yearning for those 2 or 3 months breaks off between projects to finally make a dent with Rusty Animator.

All I could think was:

“How would this ever make an impact for people? How would I ever have the time to make an in-depth course students really need to reach their dream job?”

Some part of me always knew the solution to all of this. That Rusty Animator and Rusty the studio animator couldn’t exist together. A choice had to be made, and I didn’t want to make it.

One was my dream job. One was a new dream I never saw coming.

Weta was on the table

If you’re unfamiliar with the VFX industry – Weta Digital is like Pixar or Disney in their part of the animation world. At the top of the game with films like Avatar, Avengers, Planet of the Apes, and of course Lord of the Rings.

Aside from the fanboyism I personally had, Weta would provide beaucoup cash to set my life up beautifully, and give me bragging rights forever that would open doors to any job I wanted.

But if you know Weta you know it also comes with 80-120 hour work weeks. So, Rusty Animator wouldn’t just be on the back burner – it would cease to exist for at least a year – probably more.

The best supervisor I ever had and current one at the time, whispered privately:

“Weta made my career, gave me the family life, the position I have now. After Weta everything change for me.”

I decided to play the fool.

It’s was one terrifying leap into the dark.

Last year, I was scared shitless:

As you might have guessed – it hasn’t been easy.

But DAMN it has been one hell of a ride! And there’s nothing more fulfilling than hearing from all the aspiring animators that say how much I made a difference for them.

You may be wondering:

“Well if you’re all in right now where are all the extra podcasts and posts? What happened last year?!”

What Rusty Animator achieved in 2016

2016 was about finding legs to stand on:

Leg 1: (Our first course opened in April) Memorable Animator – How to plan and invent jaw-dropping shots that get you hired.

It was a massive hit. When the doors opened, I expected 10 students and 48 came onboard instead.

4 months and many teaching hours later – several students had learned how to make their animations entertaining and had created far more impressive shots on their demo reels than ever before.

I couldn’t be more proud of them, or more fulfilled to have a hand in their growth.

Leg 2: The Ultimate Guide to Animation Schools came out to help students find the best schools and skip massive debt. It took 3 months to create and I’m still promoting it.

All the best animation schools have already shared it, and I’ve been floored at the responses from students:

Leg 3: Learning a new trade hasn’t been easy, but I’m still here. When I’m not creating guides, podcasts, or animation courses, I’m freelance writing for online businesses to pay the bills.
It’s not ideal, but it’s working well enough to keep Rusty Animator alive and kicking.  With any luck, this can be phased out soon, and I create more of what animation students need as my full-time job.

Those were the main struggles and triumphs of Rusty Animator last year.

Perhaps, it went unnoticed for you. Perhaps, you expected more support.

Well, this year all that can change.

This year, we can really get moving on both of our dreams.

How fast we get moving on our dreams, depends on how much we all grow.

If we want massive growth, we have to overcome massive struggles. And that can’t be done alone.

I’m going into face it all head on. Will you grow with me?

Together let’s make 2017 the year of massive growth

Together let’s leap over the animation struggles that have held us down.

Together let’s do the shit that scares us – let’s dare make our dreams happen.

“But isn’t it too late for setting year goals?”

Most of the world has already failed at their resolutions. It’s only too late for them.

Here’s how I’m planning to help you grow this year.

I hope you find these plans exciting.  And I hope you enjoyed my personal journey of changing my dream career.

I wanted to share it all with you so you can see why I’m doing all of this, and also so you know that all of us struggle – no matter how successful.

If you did enjoy all of this, would you let me know and share your story with me?

We’re in this together.

2018 Wins and Fails for Rusty Animator